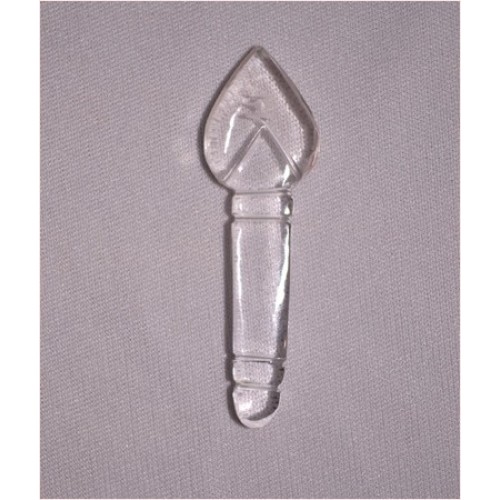 Made in Clear quartz Spatik, Spatikam Vel, Handcrafted and Hand Made

You can hold it in your Palm and carry with you wherever you travel. This will Trash all the obstacles and negatives in your path and will make way for Fearless Life.

This mystic device also symbolizes the Absolute Wisdom which destroys the inner demons of illiteracy, bad karma and sets the soul free. This Vel is also interpreted as a divine protective power to safeguard the world from adversities. This weapon is worshipped independently in some of the temples of Murugan. Just chanting the word Vel, one invokes the blessings of Lord Murugan.

Please note that the product and the photo may /will vary , the photos are meant for representation purpose only. The Actual product will differ from the picture seen.

( Please note that the Product seen in the Photo Image is meant for representation Purpose only. The Actual Product may/ will be different from the Photo image, because the Product is hand made and the design change is possible. ) Tamil Hindus have a very popular God call Lord Murugan the patron God of the Tamilians. The warrior son of Shiva and Parvati, born to kill a demon. His symbols are weapons of war, like the Vel, the Lance or the divine spear which he is always found carrying in his popular avatar, a top a peacock. This Vel was given to him by his mother Goddess Parvati to vanquish the asuras, which embodies her power and energy. This mystic device also symbolizes the Absolute Wisdom which destroys the inner demons of illiteracy, bad karma and sets the soul free. This Vel is also interpreted as a divine protective power to safeguard the world from adversities. This weapon is worshiped independently in some of the temples of Murugan. Just chanting the word Vel, one invokes the blessings of Lord Murugan.

Get your Protection now with Sphatik Murugan Vel.