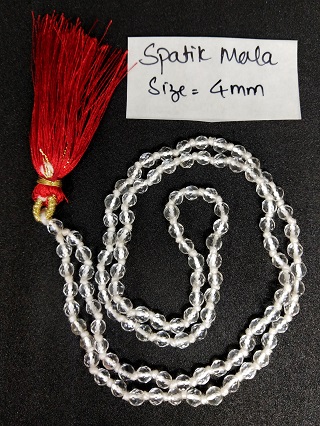 The Photograph Image and the Mala in Real could have a slight different look , its because of the Natural quality of sphatik to attract light. Sphatika , Spatik, Clear quartz crystals, Natural Rock Crystal, are one of the best Gifts to the Humanity by Universe. The looks of Clear quartz colour can be Transparent crystal clear, slightly cloudy , nearly opaque, this impart clear Sphatik benefits of their own and enhance the powers of other crystals.

Clear quartz meaning is partially based in the belief that it is the “supreme gift of Mother Earth.” Enhanced connections with all earthly elements .

Quartz comes from the European word “quarz.”. It is said Clear quartz stones are, and still, believed to be like actual living things that take a breath only once each century.

Sphatika , Spatik, Clear quartz crystals, Natural Rock Clear quartz stones connects between the spiritual and physical world by increasing communication. Spatik is considered as the master of all healing crystals due to the highest ability to magnify, enhance and amplify healing vibrations of other crystals and playing a Leaders role in the crystal world.

Quartz comes from the European word “quarz.”. It is said Clear quartz stones are, and still, believed to be like actual living things that take a breath only once each century. The Greek word for ice is krystallos, where crystal quartz got these alternate names possibly.

Some cultures around the world throughout time believed transparent quartz crystals were an incarnation of The Divine, At Srie Connections we believe that totally. Yes sphatika is a divine incarnation.

Ancient Egyptians used to wore all types of jewellery decorated with clear quartz gemstones. Transparent quarts spatik crystals were used in a variety of ways for their healing properties. They also carved clear quartz rocks into amulets that were buried with the departed people so the clear quartz powers at the root of clear quartz meaning and their icy beauty could be valued in the afterlife.

Its said that Ancient Romans thought that transparent crystal quartz was ice that was solidified over time, a belief that shaped clear quartz meaning and uses.       Women of higher social standing would hold rounded balls of clear quartz in their hands to cool them during hot weather. Special Signet rings were also carved from a clear quartz rock and worn for their cooling benefits.

Sphatika , Spatik, Clear quartz crystals, Natural Rock Clear quartz stones were used to start Holy Sacred Fires in rituals as gratitude to the gods. The transparent quartz crystals were placed on wood chips in the sunlight. It’s believed that Light shining through the clear quartz would cause the chips to smoke then burst into flames.

Like Indians, even African tribes, Aztecs, Egyptians, Native American Indians, Romans and Scots all have praised transparent quartz crystals spatika for the clear quartz powers of healing as well as the Spiritual powers. Most and almost all have used and benifited from the sphatik stones benefits in meditation, for enhanced spiritual development , protection and clear away evil magic spells.

In modern electronic world Clear quartz rock is used extensively for pyroelectric and piezoelectric powers. Its said that quartz can be used in microphones, computer memory chips, radio receivers and transmitters, ultrasound devices, watches and the circuitry of many other types of electronic devices.

Sphatika mala or Quartz crystal, a gift given to us by earth is a good conductor of energy. Sphatic is known to fulfill one’s desires in life.

A person becomes intelligent, finds wisdom and sense of well being is promoted With good luck and positive energy that an individual finds on adorning a sphatik crystal, the mental prowess are boosted many times over.

If the moon is wrongly placed in your kundali (birthchart), you should adorn a mala of Sphatik. Pure Sphatik is transparent, and it correspondingly brings about a greater clarity of thoughts and boosts the memory.

If you adorn and wear any gemstone, you could use ,adorn Sphatik mala along with the same because Sphatik mala has no side effects, and can be adorned along with all gemstones, also sphatika will enhance the energy of other crystals. With Sphatik crystal, emotional and deep relationship find strength as the mind is strengthened.

It enhances energy by absorbing, storing, amplifying, balancing, focusing and transmitting.Sphatik is a power stone. Sphatik is a stone of clarity and dispels negativity. While it can be used to purify and clarify on the spiritual, mental, and physical planes, it is also a stone of harmony.

Sphatik or Quartz crystal is a conductor of energy.

Sphatik can be used to cleanse and purify the atmosphere of even large areas – our homes and work places. It has strong field of light and energy which can be used as a sonic protection against negative VIBES Wearing a crystal mala ensures an undisturbed deep sleep. The movement of ions through the molecular structure of a Sphatik clears and neutralizes negative conditions in the aura of people of all ages. It can become our own personal healer for the body. Sphatik helps enhance our intuitive power.

Sphatika beads stimulates one’s intelligence and purifies the mind and so speech will become sweet and will get a captive attraction of voice. The key property that the sphatik crystal has is to allow the wearer to get rid of all the negativity in the environment and that the positive vibes reach him with in a more enhanced manner. A wearer thus finds protection from all negative energies in the environment.

Sphatika beads prevent one’s spiritual energy from draining out, and encourage one’s energy to flow upwards towards the sahasrara chakra. It is also said that the vishuddi chakra is sphatika in colour

Chanting is a spiritual process virtually every cultural and religious tradition, for yogic tradition a mantra is a Sanskrit word that has special powers to transform consciousness, promote healing and fulfill desires.

As said above the wearer becomes the favorite of Lord Shiva. Sphatika Mala is advised for women,(girls, yoginis, women, ladies ) Because it represents Mother Goddess.

The divine energy in Sphatik Mala Beads has healing, uplifting and purifying properties.

Diamond cutting spatika mala enhances the spirituality of the wearers by focusing on soul, makes the mind and body shine like diamond. This clear quarts Beads is a must try crystal, and will be a must benefit crystal.